What could be worse than your matchmaking mother trying to set you up?

How about discovering she knows exactly what she's doing? 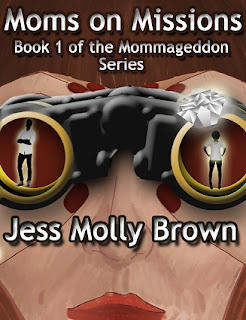 This is the problem facing Vince Russo in Jess Molly Brown's hilarious debut novel, Moms on Missions. Vince, an independent visual artist living at Niagara-on-the-lake, has put his dating life on hold to save for art school. But Diana Russo needs grandchildren in her home more than another painting, so she conspires with her friends, the Moms on Missions, to find a blonde-haired, blue-eyed Italian girl to make her dreams for her son come true. The Moms find the perfect girl, Mary diGiordano, and secretly install her in the apartment upstairs from Vince, hoping sparks will fly.

And sparks do fly. But not the good kind.

First, Mary apparently has some obnoxious drummer named Danny for a roommate whose rude attitude makes Vince want to tear out his hair. When Vince finally meets Mary, his every attempt at kindness is met with major hostility. This Mary diGiordano is a frustrating whirlwind of contradictions and not at all who Vince thought she would be.